Everyone knows about social media, it is very popular nowadays. Social media is a means by which people can connect with each other from far away countries.This is an application through which people can deliver many types of messages, mailing, news etc. Everyone from low class to high class is on social media. There are many examples of social media such as mobile apps, newspapers, TV channels, radio fm etc. Social media is a tool of mass communication through which political, economic, financial, banking, education and new technologies keeps getting new updates.

Users access social media through laptops and desktops But most of the population of the entire world is such that they use social media more through smartphones. Information is changed from one place to another by web applications on smart phones. Social media is a tool that makes it very easy for an individual to access every information. One can get information of the whole world sitting in one place. There are several types of social media let’s know:

There are thousands of social media resources on the Internet. The main of which are Facebook, Twitter, LinkedIn, Instagram, WhatsApp, WeChat, Tumblr and Telegram Channel etc. Social media apps and websites evolve daily. But out of all these, Facebook is very famous. Facebook is a medium through which people connect to each other from far and wide. via facebook people grow their business. It’s Called ‘Digital Marketing’. 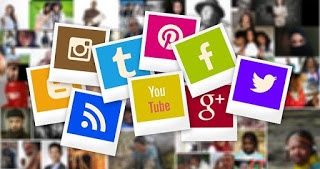 Use of social media for publicity, to increase business and delivering inspirational messages it  plays an important role. Some of the most popular social media websites with over 100 million registered users incorporate Facebook. Main among these are TikTok, WeChat, Instagram, QZone, Weibo, Twitter, Tumblr, Baidu Tieba and LinkedIn. Depending on interpretation other popular platforms that are sometimes referred to as social media services include YouTube, Quora, Telegram, WhatsApp, LINE, Snapchat, Pinterest, Viber, Reddit, Discord, Microsoft Teams and more. Wikipedia is example of co-oprative content creation.

Along with all these benefits, it also has many disadvantages. Social media has many types of effects on humans  Know ahead:-

Social media has many types of effects on people, some of which is negative and some positive. Observers have noted a wide range of positive and negative impacts of social media use. Social media can help to improve an individual’s sense of connectedness with real or online communities and can be an effective communication or marketing tool for corporations, entrepreneurs, non-profit organisations, advocacy groups, political parties, and governments. Observers have also seen that there has been a rise in social movements using social media. Let’s know impacts-

Social media also has many positive effects. Some social media sites have the potential for content posted there to spread virally over social networks. In a social media content or websites that are  which go viral are those with a greater likelihood that users will reshare content posted  to their social network. In some cases, posts containing popular content or fast-breaking news have been rapidly shared and re-shared by a huge number of users. Businesses have a special interest in viral market policies Because viral campaign Can receive widespread advertising coverage.

There are several negative impacts of social media on our society, youth and adolescents. Teenagers use social media in a wrong way and start doing many wrong activities. The use of social media sometimes involves inaccurate interactions among users. Emotional or angry conversations often take the form of reality. Sometimes this worsens the situation. Some users have experienced threats of online violence and is expected to take himself offline from these threats. Online harassment is part of cyber bullying and trolling. Studies have shown that self-comparison on social media can have dire effects on physical and mental health because they give us the ability to seek approval and compare ourselves. The use of social media affects both our physical health and mental health. Excessive use of it messes up our sleep. Many teenagers suffer from sleep deprivation as they spend long hours at night on their phones and this could affect grades, as they will be tired and unfocused in school. Blue light of the mobile phone directly affects the eyes at night, due to which sleep disturbances can cause problems of eyesight, headaches etc. But now the latest version mobile includes night mode function which does not affect the eyes.
In the end, we will say that there are more benefits of social media as well as disadvantages. Now it is up to the user to decide how they will use it. If you look at it in a positive way, it can make a lot of profit from good use.