Now in this changing world internet spreads all over globally. Internet is the vast network that connects computers all over the world. Through the internet people can share information and communicate anywhere with an internet connection. The scope of internet is not limited now it becomes  need of individual. It helps people in every field of life. People gets knowledge about their interests through the mobiles, laptops, computers and tablets which is connected with internet.

Google plays major role to runs internet. From kids to senior persons use internet to fulfill their needs. Students and kids use internet in the scope of education, service person, youngsters and old people use the internet according to their needs and interest. The Internet has made everyone’s life very easy and simple as we no longer need to go outside for paying bill, watching movie, shopping, business and transactions etc. With the help of internet, we can use social media, search anything related to studies, jobs and business ete. we can easily make friends and talk to them with the help of social media like Facebook and Instagram etc. We can prepare our projects very easily and timely. Internet is now a huge library in which documents, files, pictures, video content can be easily viewed and read. Internet is providing directions and maps in few seconds.

The internet is the Global system of interconnected computer networks. it is a network that consists of private, public, academic, business and government networks of local to global scope. The internet carries a vast range of information resources and services such as the interlinked hypertext documents and applications of the world wide web (www), electronic mail, telephony and file sharing.

The internet consists of technologies developed by different individuals and organisations. Important figures include Robert W. Taylor, who led the development of the ARPANET (an early prototype of the internet) and Vinton Cerf and Robert kahn, who developed the Transmission Control Protocol /internet protocol (TCP/IP) technologies.

Most traditional communication media including telephony, radio television, paper mail and newspapers are reshaped, giving birth to new services such as email, internet telephony, internet television, online music, digital newspaper and video streaming websites and online learning classes. newspaper, book and other printing publishing are adapting to website technology and redefined into blogging, web feeds and online news. The internet has enabled and accelerated new forms of personal interactions through instant messaging and social networking. Online shopping has grown both for major retailers and small businesses and entrepreneurs.

Applications and services of internet

The www global collection of documents, images, multimedia, applications and other resources logically interrelate by hyperlink and referenced with Uniform Resource Identifier(URLs) , which provide a global system of named references. The web has enabled individuals and organisations to publish ideas and information, advertising on popular web pages can be lucrative and e-commerce which does the sale of products and services directly via the web continues to grow. 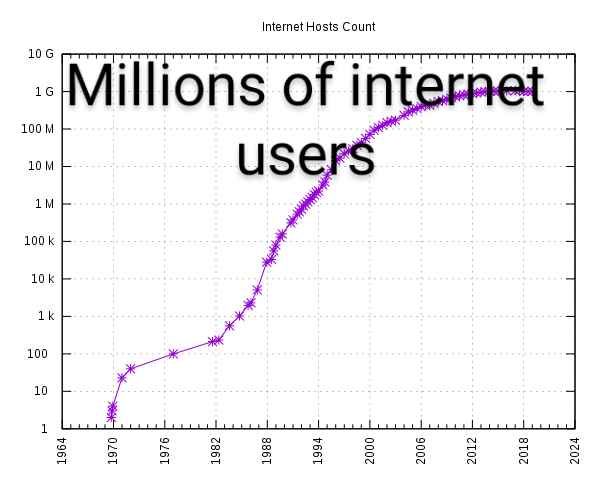 File sharing is an example of transferring large amounts of data across the internet. A computer file can be emailed to customers, colleagues and friends as an attachment. It can be uploaded to a website for file transfer protocol server for easy download by others.

It is a real time delivery of digital media for the immediate consumption for enjoyment by users. Many radio and television broadcasters provide interest feeds of their live audio and video productions.

These are low cost extension of this phenomenon while some webcams can give full rate video, the pictures either is usually small or update fast. YouTube claims that its users watch hundreds of millions and upload hundreds of thousands of videos daily.

It is a risk for both individual and organisations writing posts on social networking websites. That is especially foolish or controversial posts occasionally lead to an unexpected and possibly large-scale backlash on social media from other internet users.
Children also face dangers online such a cyber bullying and approaches by sexual Predator. Many parents choose to enable internet filtering and supervise their children’s online activities in an attempt to protect their children from inappropriate material on the internet. The most popular social networking websites such as Facebook and Twitter formerly for users under the age of 13.
Another area of leisure activity on the internet is multiplayer gaming this form of recreation communities near people of all ages enjoy the fast-paced war of multiplayer games. Group chatting,  video calls, social media sharing, online video streaming, and conference calls does work such as at a large scale of joints the communities.

Internet is being basic need for all aspects of human life.  Internet can be defined as network which connects numerous computers from all around the world. Today’s life is unimaginable without internet. The internet has a lots of information on various subjects. several websites provides detailed information about various fields . Search engines Google and Yahoo help us in assessing the information easily. The Internet is the global system of interconnected computer networks that uses the Internet protocol suite (TCP/IP) to communicate between networks and devices. It is a network of networks that consists of private, public, academic, business, and government networks of local to global scope, linked by a broad array of electronic, wireless, and optical networking technologies. The Internet carries a vast range of information resources and services, such as the inter-linked hypertext documents and applications of the World Wide Web (WWW), electronic mail, telephony, and file sharing. The Internet provides a capability so powerful  that it can be used for almost any purpose that depends on information, and it is accessible by every individual who connects to one of its constituent networks. It supports human communication via social media, electronic mail (e-mail), “chat rooms,” newsgroups, and audio- video transmission and allows people to work collaboratively at many different locations. It supports access to digital information by many applications, including the World Wide Web. The Internet has proved to be a ground for a large and growing number of “e-businesses” that carry out most of their sales and services over the Internet. We can transfer money to any account within few minutes. Nowadays People doing work from Home through Internet. Along with so many advantages the internet has also some disadvantages. People steal the information  and use it for own benefits. But it is harmful to others.  Because Internet hackers does many types of wrong things with another people’s information and data. They hack the important data and use it for own benefits. Many ciber-crimes like hacking and scamming have increasing with the use of Internet. The Internet has proven to be useful for mankind. Moreover life has become easier and faster with the internet. Although ther are disadvantages of the internet, the number of advantages  outweighs the disadvantages. We can make most out of it by following the prescribed rules and guidelines, while  using the internet.

Current affairs of May 2021 for UPSC, IAS, IPS, Banking, Railway and Teaching exams