Global warming is extensive obstacle in the world. Whole world effected by the global warming . But these saying can never wrong  that global warming is creation of human activities . Industrialization, cutting of forests, melting glaciers and  air pollution are main causes of global warming.Climate change is natural process, but it also play major role to heating up weather. The earth is warming up and humans are also to blame.

what is Global Warming

Global warming is the long term warming of the planets overall temperature. Though this warming  trend has been going on for a long time, its pace has significantly increased in the last hundreds years due to the burning of fossil fuels. Fossil fuel include coal, oil, and natural gas burning them known as “greenhouse effects” in earth atmosphere.

The burning of fuel, the smoke from the vehicles of traffic and the smoke from factories etc., which produces heat is called global warming. The level of air pollution and smoke has increased so much that it has killed the ozone layer protecting the earth in the solar system. Due to which the maximum temperature of the sun is immersed on the earth and due to such high warming temperatures, large glaciers melts occur. Let’s know how global warming increasing day by day:-

Greenhouse effect is when the sun’s rays penetrate the atmosphere but when that heat is reflected off the surface cannot back into space. Gases produced by the burning fossil fuels prevent the heat from leaving the atmosphere. These greenhouse gases are carbon dioxide, chlorofluorocarbons, water vapours, methane and nitrous oxide. These gases in the atmosphere has caused the average Global temperature to rise over time, known as a global warming. 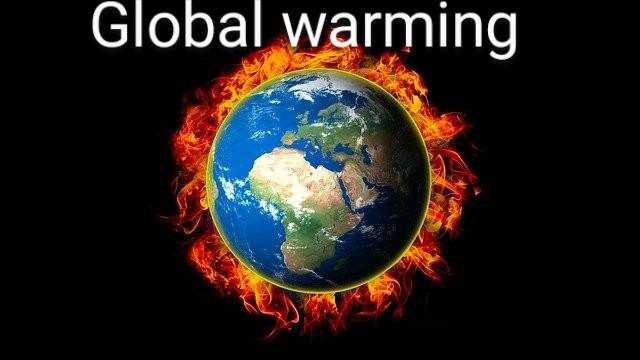 Global warming has presented another issue called climate change. Climate change refers to change in weather patterns and growing seasons around the world. It is also referred to sea level rise caused by the enlargement of warmer seas, melting ice sheets and glaciers. Global warming causes climate change in which poses a serious threat to life  on earth in the form of widespread flooding and extreme weather. Scientists continue to study global warming and its impact on earth.

Global warming due to regional variation

Amount of global warming occurs due to varying by region. This is because of the larger heat capacity of oceans  because Ocean lose more heat by evaporation. Pattern of warming are independent of the locations of greenhouse gas discharge because gases persist long enough to diffuse across the planet. Melting of glaciers and ice sheets is the Arctic dispute disrupts Ocean circulation causing increased warming in some areas.

Humans change the Earth’s surface mainly to create more agricultural land. The amount of forests land continuous to decrease and converting into crop land in the tropics. This deforestation is the most significant aspect of land surface change affecting  the global warming.

Pollution in the form of aerosols affects to human health and also affects the climate on a large scale. while aerosols typically limit global warming by reflecting sunlight that falls on snow or ice can contribute to global warming. This increases the absorption of sunlight it also increases, melting and sea level rise.

Its Impact on nature and wildlife

The major effects of global warming is on nature and wildlife because of deforestation several animals lost their Shelters and food. Nature has upheaval. Several species of trees, plants and animals destroyed. Whereas heat waves and drought and flooding have reduced ecosystem productivity in some regions. The future balance of these opposing effects is unclear. Climate change has contributed to the expansion of drier climate zones such as expansion of desert in the sub tropics. overall it is expected that climate change will result in the extinction of many species and reduced diversity of ecosystems.

The effects of climate change on humans mostly due to warming and shifts in precipitation have been detected worldwide. Human impacts include both the direct effects of extreme weather leading to injury and loss of life. As well as indirect effects such as under nutrition brought on by crop failures. Various infectious diseases are more easily transmitted in warmer climate such as dengue fever which affected children most severally and malaria. In small islands and mega deltas flooding from sea level rise is expected to threaten vital infrastructure and human settlements.

How to reduce global warming

Effective action on climate change and health requires the engagement of the global health community, and the support of the general public. “WHO provides leadership, evidence-based information and training mate rials. and works with a range of partners. to promote effective climate and health policy”.
It is not entirely impossible to reduce or to stop global warming. global warming can be stopped with the combined efforts of both individuals and governments. Both have to take steps to achieving it. It can be begin with the reduction of greenhouse gases which destroying our planet the earth’s ecosystem and environment. Government must regulate industrial waste and ban them emitting harmful gases in the air. Deforestation should be stopped and planting more trees must be encouraged.

At last we can say virtually our Earth is in danger. To protect the earth, environment, ecosystem and lives we should be put step forward to achieve the goal.

Global warming means extremely heating up activities on the earth. We humans are responsible for global warming. Because if advance technology has lots of benefits then it is harmful too. Man made technology, vehicles, industries, machinery and Pollution takes it to the way of disasters. Glaciers are reducing day by day. Pollution, heating weather is the main cause of that. If it will not stop then it can enhances the danger for all living organisms. Due to lack of green house effects global warming is increasing. Plants and trees always make the environment clean and pure. Trees control the heat of Sun rays which reduces warm weather and keep balance in climate. That’s why we live on the earth . In this changing world technology changes the human lifestyle which directly effect on nature. Industrial harmful smoke, traffic polution effects on nature and it decreases the ozone layer on atmosphere and direct harmful sun rays come on the earth surface. These sun rays enhances the global warming and put effects on human health. Due to direct sun rays people caught several types of skin diseases and another types of disease. For the protection of human life government should take steps forward to enhances the purity and cleanliness in our environment. It is possible then if individually people co-operate with government and protect the nature. People should do plant more trees and save old trees. Less use of vehicles are essential for healthy lifestyle for that people should use public transport. Industries and big factories should be far away from cities and living system. WHO provides a Comprehensive program  to protect health from climate risks and to ensure that action to mitigate the climate change also protect & improve people’s health. The ultimate impact of climate change is on our most precious resource human lives and health. Ther is an opportunity to promote policies that both reduce carbon emissions and improve health. “WHO has worked on health protection from climate change for over 25 years. From  2008, WHO member states committed to a world health assembly resolution and a WHO work plan to strengthen the health response to this risk, through four objectives- 1. Raising awareness 2.Strengthening partnership  3.Enhancing scientific evidence  4.Implementing the health response”.