write an essay on Dr. Sarvepalli Radhakrishnan in 500 words 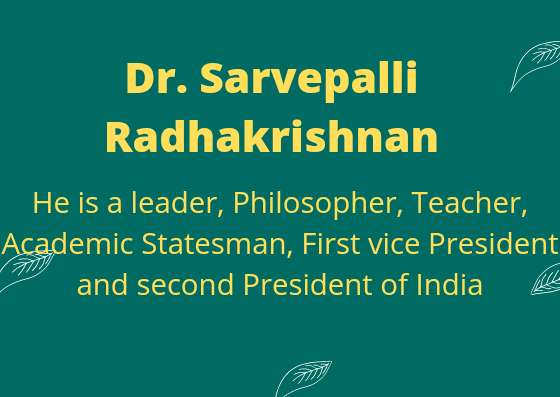 Dr.S Radhakrishnan was great personality and a legend of our country. We always celebrate Teachers day on 5th September at memory of dr. S Radhakrishnan. He was an Indian leader, philosopher, teacher, academic and  statesman,who served as the first vice President of India and the second President of India. He had many achievements in the field of education.

Sarvepalli Radhakrishnan was born in Niyogi Brahmin family in 5 September 1888. His birthplace is Thiruthani of Chittoor district of Madras. His father’s name was Sarvepalli veeraswamy and his mother’s name Sarvepalli Sita (Sitamma). His family hails from Sarvepalli village in  Nellore district of Andhra Pradesh. His early years was spend in Thiruthani. His father was a subordinate revenue official in the service of a local zamindar.

His primary education was at K.V High school at Thiruthani. In 1896 he moved to the hermannsburg Evangelical Lutheran mission school in Tirupati and Government High secondary school walajapet. Radhakrishnan was awarded scholarships throughout his academic life. He joined Voorhees college in Vellore. After his F.A class he joined the Madras Christian College at the age of 17. He graduated from there in 1906 and also finished his masters from the same college. Radhakrishnan studied philosophy.

when he became the President of India some of his friends and students requested him to allow them to celebrate his birthday on 5 September. He replied instead of celebrating my birthday it would be my proud if 5th September is observed as Teacher’s day in India.

He died at age of 86 years in 17 April 1975 in Chennai. Radhakrishnan believed that “Teachers should be the best minds in the country”

* “A life of joy and happiness is possible only on the basis of knowledge”.
* “Let us do everything for the nation first! India first! That way we will rise above division and differences.”
* “You can’t cross the sea nearly by standing and staring at the water”.
* “Cultivation of mind should be the ultimate aim of human existence”.* “Keep on beginning and failing. Each time you fail, start all over again and you will grow stronger until you have accomplished a purpose not the one you began with perhaps but one you will be glad to remember”.