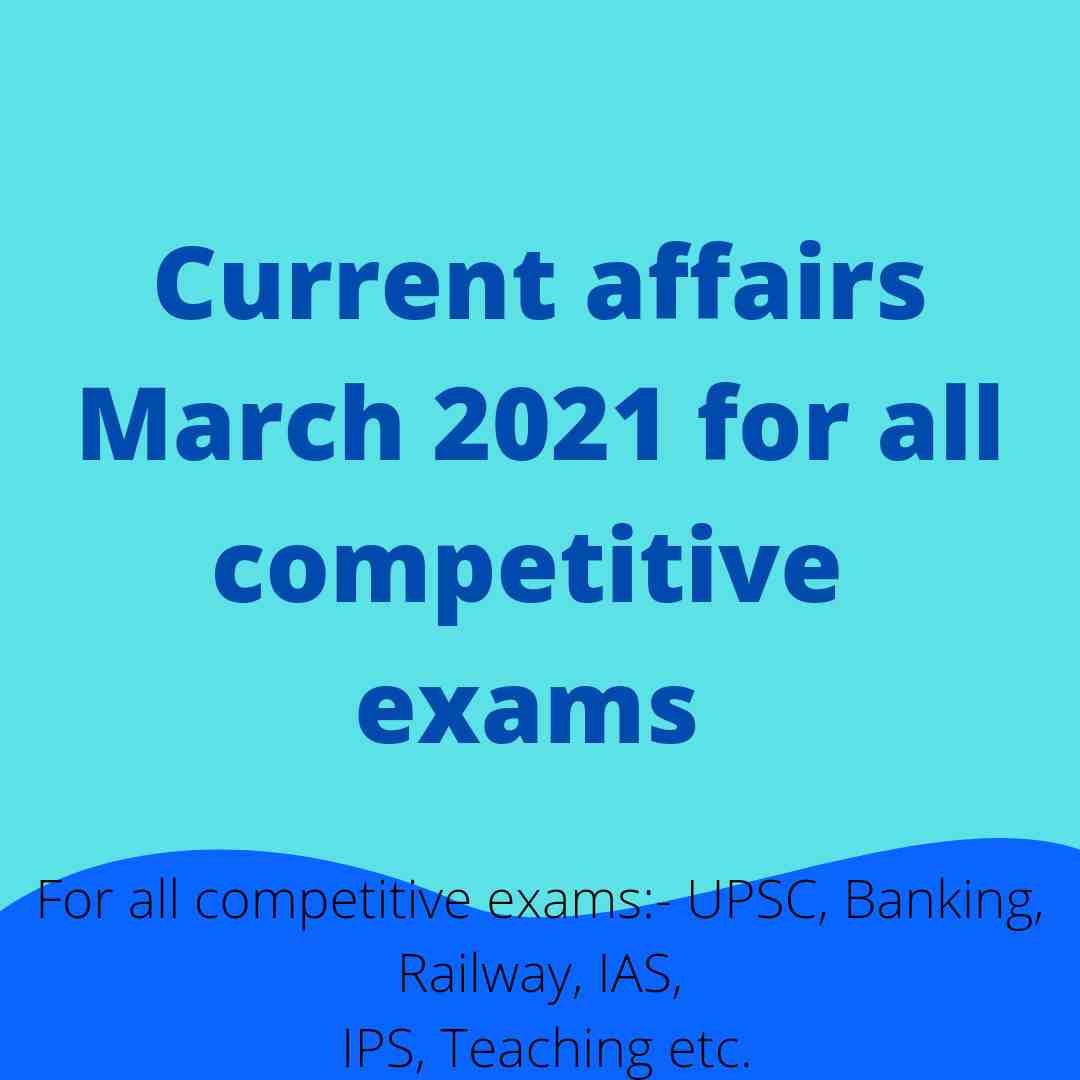 • Axis Bank has Partnered with Whatsapp to offer basic banking services to its customers.

• Kuldeep Singh has given an additional charge of CRPF director general  after AP Maheshwari retires.

• Nagaland has launched ” I- Learn” a capacity building and performance tracking app for Community Health Officers. • International Transgender day of visibility is observed on 31st March.
• Union Minister of Finance and Corporate Affairs Nirmala Sitharaman attended the 6th annual meeting of the board of the governors of Development bank.
• India will participate in the France- Led Naval drill “La Perouse” for the first time in the way of Bengal. Australia, Japan and USA will also participate in La Perouse.• Noted Marathi writer Dr. SharanKumar Limbale will receive Saraswati Samman 2020 for his book Sanatan.
• A book “1232 km: A Long Journey Home” is authored by Vinod Kapri.
• Mahinder Giri is the name of the only ranger from Asia who has won the Prestigious International Ranger award for his contribution towards conservation.
• Virat Kohli has become the third captain to lead India in 200 International matches.
• World’s First Ship Tunnel is being made  in Norway. • Laszlo Lovasz and Avi Wigderson both has been awarded  ‘Abel Prize’ for 2021.
• Anish Saha will take over as the Managing Director and CEO of Mahindra and Mahindra.
• Lewis Hamilton has won the 2021 Bahrain Grand Prix title.
• Uttar Pradesh state government has approved affordable Rental housing and complexes scheme for urban migrants/ poor labourers.
• Sassou Nguesso is the name of president of  republic of Congo.
•  ‘Girl Gang’ a track by  singer Gin Wigmore, has been announced as the official song of the 2022 ICC women’s World Cup and she is from Newzealand.
• Ministery of AYUSH has set up an interdisciplinary team of experts to explore the potential of Yoga as a productivity  enhancing tool for the population.

• Yogasan sport for both male and female categories have been included in khelo India Youth Games, 2021.
• Sanjeev Kumar has been appointed as the chairman of Airports Authority of India.
• Vivek Murthy is the name of Indian- American  Physician Who has been confirmed by the Senate as President Joe Biden’s Sergeon General. • The Governments has extended the term of Principal Scientific advisor K. VijayRaghvan by a year.
• NV Ramana will be the 48th Chief Justice of India.
•  Indian coast guard ship ‘Vajra’ was commissioned by General Bipin Rawat, chief of Defence staff at kattu palli in Chennai.
• International day for the Eliminating Racial Discrimination is observed on 21 March and it’s theme is ” Youth Standing  Up against Racism”.
• Well known Hindi writer Professor Sharad Pagare will be conferred with the prestigious Vyas Samman  2020 for his novel ” Patilputra ki samragi”.
• ESAF Small Finance Bank has been awarded the “Great Place to Work” certification by the Great Place to Work Institute. • “The clock is ticking” theme of World Tuberculosis (TB) day. It is observed on 24 March.
• Vice President M Venkaya has released the book “Bringing Government and People Closer”. It is authored by M Ramachandran.
• World Meteorological day is observed on 23 March and it’s theme is ” The Ocean, Our Climate and Weather”.

• China has the strongest military forces in the world while India stands at number four. According to a study  released by defence website military direct USA is on second place.
• Nozomi Okuhara won the all England women’s title by defeating Thailand’s Pornpawee Chochuwong. She’s from Japan.
• Lee Zii Jia has won the all England men’s title by defeating Denmark’s  Viktor Axleson. He is from Malaysia.
• Ganemat Sekhon has won a Skeet medal in the shooting world cup at the Dr. karni Singh Range, Tughlakabad. It was the first ever world cup medal for India in women’s Skeet.
• Successfull test fired a new version of the  surface to surface Nuclear- capable ballistic missile (Stand off Anti-Tank) “Shaurya”  at the Balasore, off the coast of Odisha.
• SCO announced to conduct ‘pubbi Anti terror 2021’ exercise.- SCO stands for Shanghai Cooperation Organisation.- ‘Pubbi Anti-Terror 2021’ will be a joint anti terrorism exercise.- India Pakistan and China will be participat in this exercise. Vladimir Norov is the secretary general.

2.” Hearing care for all” is the theme of world hearing day. It is observed on 3rd March.

4. The governor of Tripura, Ramesh Bias has inaugurated the Udaipur Science Center at Udaipur, Tripura.

5. Manpreet Vohra has been appointed as India’s next high commissioner to Australia.

6. Care rating has announced the appointment of Sachin Gupta as its chief rating officer.

7. Kotak Mahindra Bank has announced a memorandum of understanding with the Indian Army for salary account.

8. Prime Minister Narendra Modi has hold a virtual summit with Stephen Lofven. He is the prime minister of Sweden.

10. Hardeep Singh Puri Minister of state housing and urban affairs announced the release of the final ranking of Ease of living index 2020. Bengaluru city has topped in the million plus category and Shimla city has  topped in the less then million category.

12.  “A combined Commanders” conference has been started at Kevadia  Gujrat state.

13. The government has set up a high level National committee headed by Prime Minister Narendra Modi to commemorate 75 years of India’s independence.

14. 30th Bihari puraskar  for 2020 will be given to Mohan Krishna bohara for his Hindi book titled Taslima:  Sangharsh aur sahitya.

16. Indian Shuttlers Varun Kapoor and Malvika Bansod have won the men’s and women’s singles titles respectively at the  2021 Uganda International in Kampala.

17. India has inked pact with Phillipines for sale of ‘Defence equipment’.

19. With ICICI Bank, PNB Housing Finance tied up for a strategic co- lending service that will facilitate retail home loan at compititive rate.

20. United Nations environment programme release the food waste index report 2021. This report estimates that around 931 million Tonnes of food waste was generated in 2019.

22. Indian boxer Manish Kaushik has won the gold medal in the 63 kg  category by defeating Nikolai Terteryan in the 35th  Boxam International Tournament in the Castellon, Spain.          –   India has finished with 10 Medals including one Gold in Boxam International the first edition of Boxam  Tournament was held in Almeria in 1976.

25. International women’s day is observed on 8 March. Its theme is ”women in leadership: achieving an equal future in a covid-19 world.

26. Prime Minister Narender Modi has dedicated to the nation the 7500 Jan Aushadhi kendra at north eastern Indira Gandhi Regional Institute of Health and Medical Science in Shilong and its aim to provide quality medicines at an affordable price. – From 86 centers in 2014 the number of stores under the scheme has grown to 7500, covering all districts of country. -Government will increase the number of Jan Aushadhi stores to ten thousand by 2024. – To create more awareness about ”Jan Aushadhi” an entire week from 1st to 7th March was celebrated as ”Jan Aushadhi  Week” across the nation. -Its theme is -”Jan Aushadhi, Seva bhi Rojgar bhi”- The last day of the week 7th march has been celebrated as ”Jan Aushadhi Diwas”.

27. Aanya Goyal a 13 years old Indian Origin school girl has become the youngest to be selected for the Britain Team which will compete at the Prestigious European Girls, Mathematical Olympiad to hosted by Gorgia.

28. Board of Control for cricket in India announce the schedule for The 14th edition of Indian premier league 2021 to be held in India.- Ahmedabad, Bengaluru, Chennai, Delhi, Mumbai and Kolkata hosting the event.

33. Minister of state for external affairs V Murlidharan unveiled two of the passport sewa kendra PSKs to be transformed as All women PSKs. – One PSK is at RK Puram Bikhaji Cama place in new Delhi and another at Tripunithura Cochin, Kerala.

34. Prime minister Narendra Modi has chaired the first meeting of the National Committee to commemorate 75 years of independence as the ‘Azadi ka Mahotsav’.

35. HDFC Bank has announced the launch of ‘Smartup Unnati’ a dedicated program for mentoring women entrepreneurs  by women leaders at the bank.

37. Former Rajasthan Governor Anshuman Singh has passed away. He was 86 years old.

38. Central Board of Indirect Taxes and Customs notified that e- invoicing will be mandatory for business to business transactions for taxpayers having turnover of over Rs. 50 Crore from April 1, 2021.