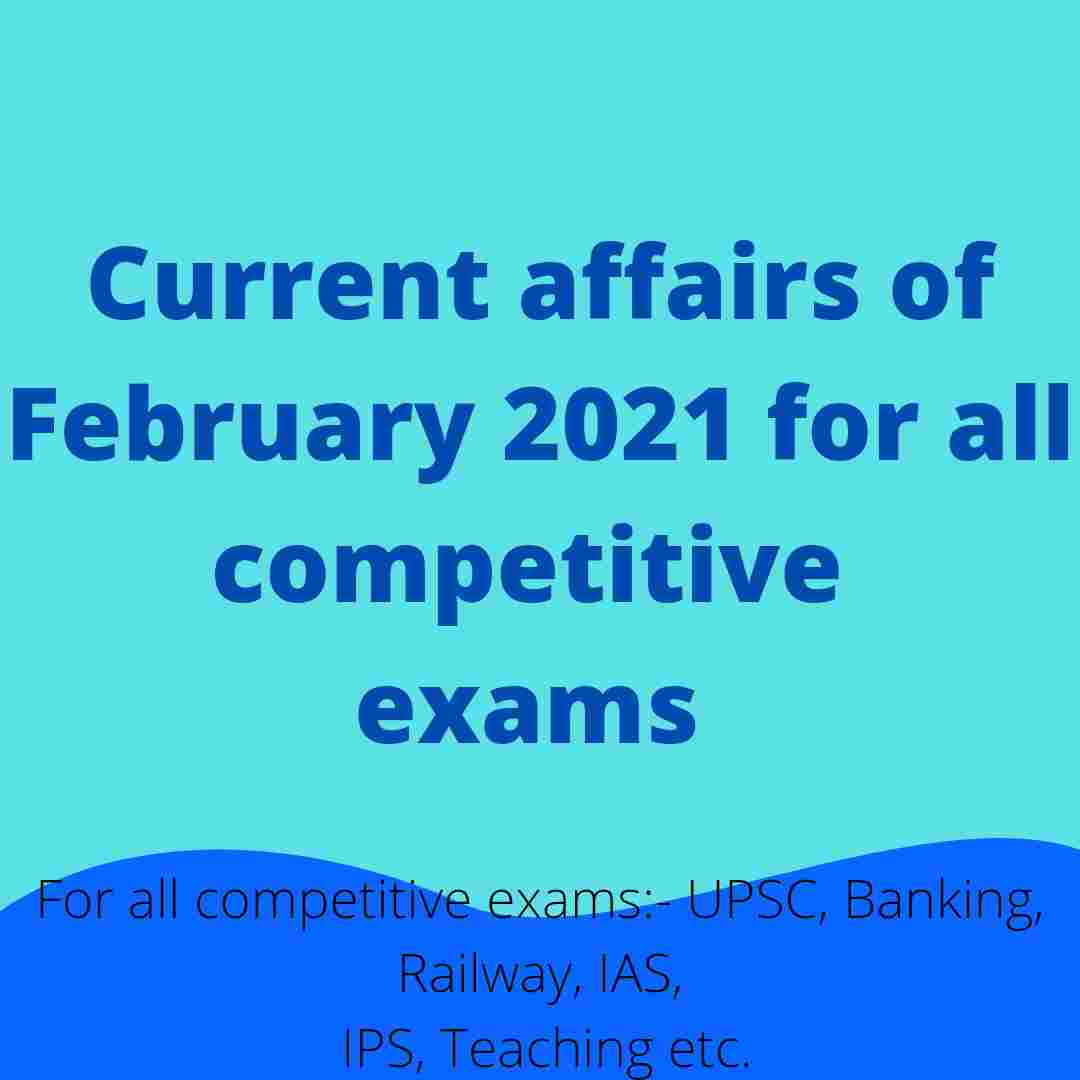 2. According to the performance index complied by the Sydney- based Lowy institute, newzealand handled the  Pandemic more effectively than any other country in the world, while Brazil sits at the bottom of the list.

3.  BCCI secretary Jay Shah was elected the president of the Asian cricket council (ACC) . He has replaced BCB President Nazmul Hasan and is the youngest administrator to be appointed ACC president. Amitabh Chaudhary is the chairman of ACC.

5. This year for the first time the union budget will only be available in the digital format and can also be assessed through mobile app UNION BUDGET both on android and IOS platform.

6. Nepal has decided to award the contract for construction of 679 megawatt of lower Arun Hydropower Project to India’s Satluj Jal Vidyut Nigam.

Its headquarters at New Delhi. The name of its director general is Krishna Swamy Natarajan.

10. The government has approved the Rs.946 crore Startup India Seed Fund Scheme (SISFS) for the period 2021-25 to offer early stage  funding to startup.Implementing Body- Department for promotion of industry and Internal Trade (DPIIT). It will implements on 1st April 2021.

11. RBI said the license of Maharashtra based Shivam Sahkari Bank has been cancelled as it does not have adequate capital and earning prospects.

12. ‘Wetlands and water’ is the theme of world’s wetlands day . It is observed on 2nd February.

13. Chandi Prasad Mohanty has assumed the appointment of the vice chief of the Army staff on 1st February 2021.

15. A book “Yes man: The Untold story of Rana Kapoor” is authored by  Pavan C Lal.

16. Tamilnadu has lifted the coveted Sayed Mushtaq Ali T20 Trophy after defeating  Broda by seven wickets in the final at the Sardar Patel Stadium in Ahmedabad.

17. Lucknow metro has become the first metro  in the country to use ultraviolet (UV) rays to sanitise train coaches.

19. Indian -American Bhavya Lal was appointed by NASA as the acting chief of  Staff of the US space agency. Washington DC is the headquarters of the National Aeronautics Space Administration (NASA).

20. Babul Supriyo has announced the establishment of center for wetlands conservation and management, as a part of the National center for sustainable Coastal  Management Chennai. He is the minister of the state environment forest and climate change.

25. Y Vishvanath Gowd has been appointed as the managing director and chief executive officer of LIC housing  finance Ltd.

26. Reserve Bank of India appointed an external professional IT firm for carrying out a special audit of HDFC entire IT infrastructure.

27. 16th edition of Indo- US joint military exercise Youth Abhyas  will be held at Mahajan field firing range in Rajasthan.

28. According to the celebrity brand valuation study 2020 released by  Duff and Phelps, Virat Kohli has been ranked as the most valuable celebrity for the fourth consecutive year in 2020 with a brand value of USD 237.7 million and the second and third spot have gone to hindi film actor Akshay Kumar and Ranveer Singh .

30. To boost the  safety of farmers crops and ensure maximum benefits of crops insurance reaches to farmers, the government of India has allocated rs. 16000 crore for Pradhan Mantri Fasal Bima Yojana for the fiscal year 2021- 22.

31. S N Subramanian has been appointed  Chairman of the National Safety Council for a period of three years.

32. A book “Platform scale:  For a post Pandemic world” has been written by Sangeet Paul Chaudhary.

33. International Day of Zero Tolerance for Female Genital  Mutilation is observed on 6 February.

34. Monetary Policy Committee has decided to keep the policy repo rate under the liquidity  adjustment  facility unchanged at 4.0%.

35. California based fintech platform paypal will shut domestic business in India from 1 April 2021.

36. Federal Bank has announced the launch of “Fedfirst” a special saving accounts for children below 18 years of age. Federal Bank founded at 23 April 1931 and it’s headquarters at Aluva, Kochi, Kerala. Its M D and CEO is Shyam Shrinivasan.

37.  Akhtar Ali a former Davis cup coach and a legendary figure in Indian tennis, passed away recently. He was 83 years old.

39. Central Bank of Shri Lanka has agreed a $400 million currency swap facility from the Reserve Bank of India.

41. Rishabh Pant has won the ICC’s inaugural player of the month award for his superlative performances in the two tests against  Australia in January.

42. South Africa’s Shabnim Ismail has been named as the “ICC women’s player of the month”.

44. Prime minister Narendra Modi  inaugurated the World Sustainable Development Summit 2021on 10th February. The theme of the summit is ” Redefining our common future: safe and secure environment for all”. The 20th edition of Energy and Resources Institute’s flagship event, World Sustainable Development Summit was held online from  10th to 12th February 2021.

45. Nigerian economist Ngozi Okonjo-Iweala has been chosen as the next Director General of the World Trade Organization.
46. United Nations Secretary-general Antonio Guterres  re-appointed Michael Bloomberg as his special envoy on climate ambition and solutions.

47. Former US secretary of state, George Shultz has passed away  recently.  He was 100 years old.
48. World Pulses day observed on 10th February.

49. Uttar Pradesh  government has been introduced a system of issuing a unique 16- digit unicode to mark all the kinds of land holding in the state.

50. Bank of Maharashtra has entered into a strategic co-lending agreement for MSME loans with loanTap Credit products pvt.ltd, a Pune based non- banking finance company. Bank of Maharashtra founded at 16 September 1935 and it’s headquarters at Pune. A S Rajeev is MD and CEO of this Bank.

51. Digital payment platform PhonePe has partnered with Axis Bank on a unified payment interface multi-bank model. Axis Bank founded at 1993. Its headquarters at Mumbai, Maharashtra. Amitabh Chaudhary is MD & CEO of Axis  Bank and the chairman is Rakesh Makhija.

52. Madhya Pradesh’s Sunil Dawar broke a twenty four years old a record when he won the under 20 men’s 5000 metre gold in the National  Junior Athletics Championships in 14 minutes 13.95 seconds at the Surujasai Stadium.

53. India slipped two places to 53rd position in the 2020 Democracy index’s global ranking according to the economist Intelligence unit. Norway country has topped.

54. Ashok Dinda is related to cricket sports. 55. Ajay Singh has been re-elected as president of the Boxing Federation of India.

Question:- Who has elected the president of the Asian cricket council (ACC) ?

Question:- Who has written a book “Platform scale:  For a post Pandemic world”?